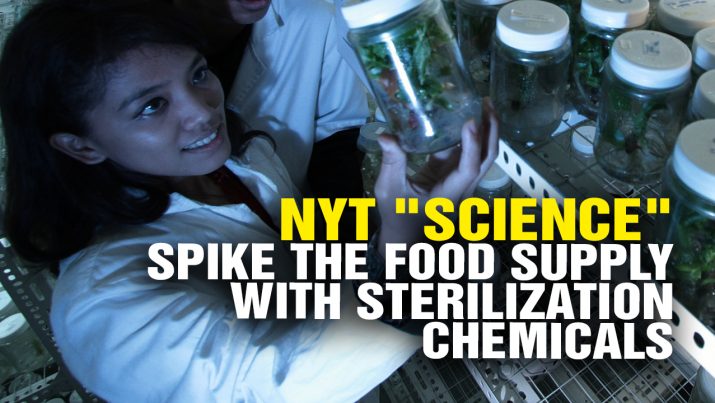 Natural News exposes the New York Times for pushing to spike the food supply with mass sterilization chemicals in order to eliminate blacks.

Yes, the NYT pushed eugenics and genocide. Today, the same agenda is carried on by Planned Parenthood.

Podcast Transcript: “Whoever controls history, controls the population. That’s why you’ve never been told the real history of science, medicine, vaccines, and depopulation – all of these things. I was just citing an article published in 1969, in the New York Times, in an article the other day on NaturalNews.com. It quoted Paul Ehrlich, who of course is a big depopulation guy. He, and President Richard Nixon’s chief science adviser, were saying that they needed to spike all the food with sterilization chemicals in order to make sure that people don’t reproduce. If you’re hearing this you’re probably thinking, “No. That’s nonsense – couldn’t be true.” Well, I tell you what… I have had this New York Times article transcribed, because… You can get it in a PDF form so I’ve had it re-typed in. We’re going to be publishing most of this article on NaturalNews.com. So, by the time you’re hearing this, we might already have it published. Just go to NaturalNews.com and search for New York Times food sterilization chemicals or something along those lines. You’ll see the article, you’ll see the link, and you’ll know that what I’m telling you is 100% true. The New York Times pushed this agenda of using covert chemicals in the food supply to achieve mass sterilization – mostly of black people by the way – because this was… you gotta understand there’s a whole history of eugenics in the United States and again people this has all been memory-holed. Nobody seems to know about this, but it’s documented history…” Listen to the full podcast below:

NYT article pushes STERILIZATION chemicals in the food supply from NaturalNews on Vimeo.