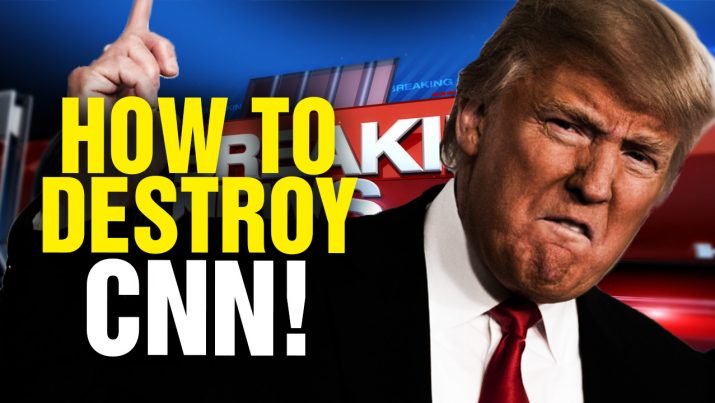 President Donald Trump can take down CNN and the other fake media outlets, by signing one executive order, the Health Ranger reveals. In a new YouTube video, Mike Adams says that it only takes one simple signature, and CNN and other fake news media will be no more. This particular executive order will slash 70% off revenues of the fake mainstream media, and it can be done virtually overnight.

The Health Ranger reports that most of the mainstream media is predominantly funded by drug advertising. Drug companies provide up to 70% of revenues of mainstream media. Even though mainstream media outlets do not have a significant number of audience, they are still “relevant” because they are being heavily funded by the big pharmaceutical industry. Drug ads on these media outlets provide a reliable and steady stream of money so they can keep running. But prior to 1997, advertising drugs was illegal. In other words, these drug companies could not advertise directly to their consumers. Their main method of advertising was through medical journals, which are also owned by the drug companies.

Pharmaceutical companies are the ones that determine which articles are published in these journals and which are not. That’s why most of these medical journals are “prostitutes” for the pharmaceutical industry, says Mike Adams. However, direct-to-consumer (DTC) advertising was legalized by the FDA in 1997.

Mike Adams is a prolific scientist who has made numerous discoveries and pursues lab research in the public interest. He has made multiple discoveries such as the revelation of rice protein products imported from South Korea that were contaminated with toxic heavy metals. The Health Ranger was also the first ever food scientist to record the high concentrations of tungsten in various superfoods. Adams directs the non-profit Consumer Wellness Center (CWC). It is an organization that transfers 100 percent of its donations to grant program specializing in teaching children and women to grow their own food to significantly enhance their nutrition. Through CWC, the Health Ranger also founded Nutrition Rescue. It is a program that donates to people in need of essential vitamins. His online store HealthRangerStore.com offers organic superfoods to boost health.

The FDA simply announced that it will allow drug advertisements directly to consumers. This practice has no logical and medical justification whatsoever. It’s the insane practice that has made healthcare in the United States not affordable. It has dramatically increased the drug prices up to a thousand percent. Clearly, the drug industry is funneling money to the mainstream media by pushing drug ads.

This practice is illegal everywhere else in the world except in New Zealand, according to Adams. But now that Trump is in charge (officially) of the FDA, he can sign an executive order that says “Direct-to-consumer advertising shall no longer be allowed by the FDA.”

TV advertising of pharmaceuticals is a violation of basic medical honesty. Furthermore, it causes massive inflation in drug pricing, consequently bankrupting the government, the healthcare system, the pensions, and many more. This folly has to stop. If, and when, President Trump signs the executive order, the fake mainstream media will lose substantial revenues. Remember that 70% of the revenues the media outlets are enjoying come from the drug industry.